One personality whose various manifestations exist in the current world is the founder of Modern-day Afghanistan, the Ruler of the Durrani Dynasty – Ahmed Shah Abdali.

On this day, in 1772 Ahmed Shah Abdali died, reportedly from a cancerous growth on his face. His mausoleum is in Kandahar, Afghanistan. An able king, who ruled over his subjects benevolently and justly. The following inscription is said to be on his tombstone:

The King of high rank, Ahmad Shah Durrani,
Was equal to Kisra in managing the affairs of his government.
In his time, from the awe of his glory and greatness,
The lioness nourished the stag with her milk.
From all sides in the ear of his enemies there arrived
A thousand reproofs from the tongue of his dagger.
The date of his departure for the house of mortality
Was the year of the Hijra 1186.

Ahmed Shah Abdali was born in 1722 to Zaman Khan Abdali and Zarghuna Alokozai of the Pashtun Abdali Clan. However, where some sources place his birth in Herat,Afghanistan, others place it in modern-day Multan, Pakistan. It was in his early teenage years that Abdali became interested in politics.

Furthermore,by 1740 Abdali and his older brother had managed to join Nader Shah’s forces, along with several of their clansmen. Throughout his service in the army, Abdali held various positions, contributing to the growth of his military experience. These quickly made him invaluable to the Shah, who recognized and praised his talents. Soon Ahmed Shah Abdali was appointed the Commander of the Abdali Cavalry.  Moreover, after Nader Shah’s assassination in 1747, Abdali was appointed the new head, by the Loya Jirga in Kandahar.

From Abdali to Durrani

Moreover, after he became King, Ahmed Shah Abdali, received the title of “Shah Durr-i-Durrani”, which translates to the “King Pearl of Pearls”. The Abdali Clan also changed their name, from Abdali to Durrani, in honor of his ascension.

Of Ahmed Shah Durrani’s many innovations, was the introduction of artillery. Moreover, he is also credited for the professionalization of the armies of the Pashtun tribes in Afghanistan. He also opened the army to non-Pashtun peoples and introduced training institutions for the military. His most lasting and positive contribution was the fact that he laid down the foundation for present-day Afghanistan, by consolidating and joining the Afghan tribes. He also introduced a council of elders which was an overall inclusive council, that also included members that did not agree to his rule. He also set up postal services and the first press publication

The Third Battle of Panipat

Furthermore, owing to the Ahmadiya Treaty, the Marathas were controlling the whole of India. As the Marathas grew in power, they began to bully the Muslim states and provinces. Hence, Muslim leaders like Shah Waliullah appealed to Ahmed Shah, who then declared Jihad against the Marathas. Moreover, under his liege, Baloch, Tajiks, and Muslims from South Asia united to fight the tyranny of the Marathas. By 1759,  Abdali reached the doorstep of the Maratha rule in Lahore, and by January 1761, the Third Battle of Panipat transpired. The Muslim army led by Ahmad Shah became victorious against the Hindu Marathas.

under his liege, Baloch, Tajiks, and Muslims from South Asia united to fight the tyranny of the Marathas.

The Heart of a Poet 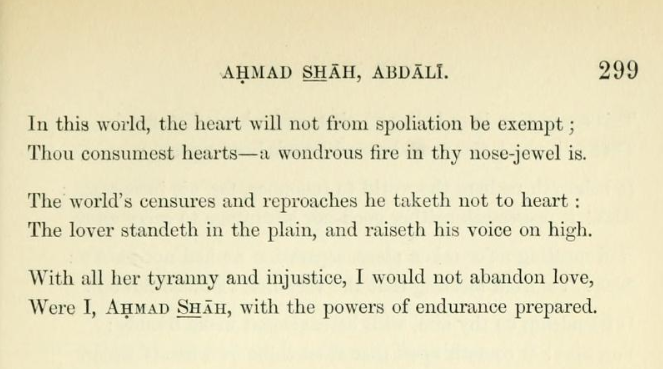 “With all her tyranny and injustice, I would not abandon love Were I, Ahmad Shah [Abdālī], with the power of endurance prepared”

Moreoverr, Abdālī is mostly known for his military greatness but few may know that he was a Sufi poet and used to hold Majlis-e-Ulema (assembly of the learned), in times of tranquility, on subjects of civil-law, divinity, science & literature in general.
Ahmad Shāh Abdālī himself was a Molvi—a term equivalent of Doctor of Literature or Divinity. He wrote a collection of Odes in Pashto & some poems in Persian.

“Love of a Nation”
By blood, we are immersed in love of you.
The youth lose their heads for your sake.
I come to you and my heart finds rest.
Away from you, grief clings to my heart like a snake.
I forget the throne of Delhi when I remember the mountain tops of my Afghan land.
If I must choose between the world and you, I shall not hesitate to claim your barren deserts as my own.

Furthermore, Raverty had published the translation of 12 of his poems in “Selections from the poetry of the Afghans: from the sixteenth to the nineteenth century”, in 1862. You can see Ahmad Shah Abdālī shares the list with Khushal Khan Khattak and Abdur Rahman Baba, the top Pashtun poets.

This article is based on the following thread by Twitter user, Dr. Nafees Ur Rehman (@NafeesRehmanDr)

Pak Afghan Youth Forum - January 9, 2021 0
Turkey and Pakistan to create local content An official statement has been issued by the Pakistani prime minister's office which mentioned that Pakistan and Turkey...

Tayyaba Sattar - January 7, 2021 0
Frontier Corp (FC) is once again targeted by the cross-border attack from Afghanistan on a military post in Mohmand District on Wednesday. A solider...